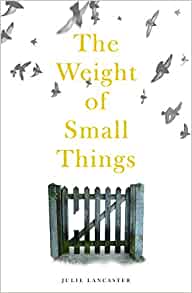 Chapter One Arctic Red
1988
Frankie Appleton was counting gates. Heavy rain was flicking forward-slashes onto the car windscreen and the botanical temperature inside the car was steaming up the glass like a curtain but she was soon able to find a rhythm. Wipe the glass, count the gate. Wipe the glass, count the gate.
As the glimpsed gates sped by, wrought-iron, double-hinged, Buxton, lattice, Frankie’s fingers grazed the slip of paper in her coat pocket, a sentence from the magazine Garden Gates – A Definitive Guide: ‘A gate is the first thing that a visitor sees and its appearance gives an indication of what lies beyond it, providing either a positive or negative first impression.’
She didn’t just like counting gates. She liked designing them too. She’d written the quote in red felt-tip pen on her bedroom wall, behind a Madonna poster – the ‘Angel’ one, where she’s wrapped in a blue towel, or maybe it’s a blue dressing gown. She could never quite decide which. As with most things, one day it was one thing, the next day another. It was also glued onto the eight shoebox lids beneath her bed, the boxes housing hundreds of pencil sketches of gates, all named after rivers, because, like rivers, gates led elsewhere too.
Some were named after famous rivers like the Nile and the Danube, others after lesser-known rivers such as the Yellowknife and the Arctic Red. Fellow gate-enthusiast David Miller, author of her most treasured book The Grandeur of Gates and a graduate of the Academy of Fine Arts in Florence agreed: ‘A gate is the ultimate link between you and what lies ahead and both functionality and aesthetic appeal are of equal importance.’ His gate designs were some of the most innovative and inspirational that Frankie had ever seen; so much so that she’d spent three days last summer composing a fourteen-page letter to him. She was yet to receive a reply.
But she hadn’t given up hope. Designing gates took patience, letter-writing, similarly so. And he was no doubt extremely busy. There were so many neglected gates to renovate, so many empty spaces to fill. Their paths would cross one day, she was sure of it, but there was no time to think about exactly when that might be because her current favourite gate was a mere five gates away. Distance for Frankie was always measured in gates. She quietly counted down, building up the tension like they did when announcing Miss World: 4 . . . 3 . . . 2 . . . 1 . . . And the winner is . . . 7, Darwin Crescent was a long-limbed four-storey redbrick townhouse that bowed and swayed like a drunken sailor.

Popular posts from this blog

April 25, 2019
Buy here This is the first book I have read by this author and I have to say I really enjoyed it. I will be looking out for more.  I wasn't sure about it to begin with it is a bit of a slow burner. I kept having to look back at the family tree as i kept forgetting who was who. So was really handy to have this in the front of the book. I think because I was expecting something different I was a bit cautious reading it but I had no reason to be. I really enjoyed it.  I enjoyed the way it told the story in the past and the present, this really added another dimension to the book. I loved seeing things from every characters perspective, it made me guess who was telling the truth and who was lying. Hard to know what to believe.  Once I started to read it, and things strarted to slot into place I couldn't put it down. There were a few cliffhangers in this book, not great if your reading it before work and you reach one and have to leave! The shorter chapters fo
Post a Comment
Read more

November 17, 2020
Buy Here  “Those are liquid-brown eyes I could fall into, my son,” she said. “I’m certain it won’t be long until you choose your human.” Me, choosing someone myself? That would be a fine thing. I’d be lucky to get any home of my own at this rate. “You’re doing nothing wrong,” soothed Mamma. “You’re a special pug who’ll make a special pet. You’re just waiting for The One.”   “But how will I know what The One looks like?” I persisted.   Mamma licked my ears as she thought for a moment. I guessed she was glad I was still here as she pondered her answer. “They’ll smell the best,” she whispered. “But remember, when you’ve finally found them, what you need to do?”   “Discover my Puggy Purpose, Mamma,” I parroted. Just as she made us say every night before we went to sleep.   Discovering our Puggy Purpose is something every pug is taught as soon as we open our eyes. If we know what our purpose as a pet is, w
Post a Comment
Read more

The De-Coding of Jo: Hall of Ignorance - Lali A. Love

August 24, 2020
Buy Here As she travelled through higher dimensions, Jo noticed narrow tubes of energy that stretched across the entire length of the ever-expanding universe. These thin regions of cosmic strings presented themselves in loops with no ends. Since Jo had transformed into her ethereal light vessel, it allowed her to move through these strings as it bent the space-time continuum. These hidden dimensions were tightly wound using elementary particles, providing a cosmic superstring gravity wave energy that stretched across the vast distances of the universe. Fluctuating between space and time, Jo had been guided by the Galactic Medallion used as a cosmic compass back to the Pleiades, to meet with the Council of Creation. This dimension was deemed to emulate heaven as humans would have described it on Earth. It was the headquarters for the Divine Source, unified field of consciousness, where the Soul would journey before their experience and incarnation on planet Earth. Much like a movie
Post a Comment
Read more